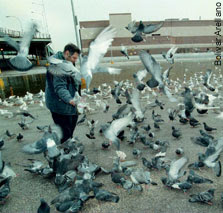 NET WORTH: Swarms of pigeons — even these pests being fed at Flushing Meadows Corona Park in Queens — can mean cash to an unscrupulous few. Some rustlers sell the fowl for $10 each to legal, out-of-state pigeon shoots, the city Health Department says.

According to city Health Department Commissioner Thomas Frieden, several city and state agencies have recently joined forces to combat "pigeon netting," the underground act of snatching pigeons off the streets and selling them for $5 and $10 each, mostly to legal, out-of-state pigeon shoots.
According to bird advocates, men armed with large nets drive around the city - particularly in the early-morning hours, when birds are hungry - and place seed on the ground to attract pigeons. When the birds come to eat, the men throw nets over them, place them in trucks, and drive off.
"It happens incredibly fast," said one advocate. "This is a solid operation. There are usually groups of guys, and they use several cars with switched license plates. They get $5 a bird to ship them off to pigeon shoots, particularly in Pennsylvania. It's cruel, it's wrong, and it's happening right under our noses and no one's doing anything about it."
Anna Dove of the New York Bird Club, who complained of the bird-napping to Queens City Councilman Tony Avella, said she's battled the problem for 10 years.
"We don't know how big it is, but I think it's big business," she said. "Transporting birds over state lines is illegal. They're not allowed to remove them from their habitat unless they have a permit."
Other advocates said pigeon-nappers also sell to restaurants, although they couldn't provide any evidence.
"We've followed the netters to a warehouse in Queens that sells poultry," said one advocate, who also didn't want to be named. "We're still trying to pull together evidence.
"This is not a joke. A lot of people think, 'Oh, pigeons, what's the big deal?' But it is a big deal. These are wild birds, and they're being stolen right off the street. It's not right."
Avella contacted Frieden's office after receiving Dove's shocking complaint.
"I was quite surprised," he said of the pigeon-poaching phenomenon. "The city's already moving on this. I think their response proves their level of seriousness."
Health Commissioner Frieden, in a Dec. 14 letter to Avella, said his agency, along with "the Department of Environmental Protection, the Police Department [and] the New York State Department of Environmental Conservation . . . are coordinating our resources in an attempt to address this illegal activity."
He added: "At this time, any citizen observing the illegal netting of pigeons can report details of this act by dialing 311."
angela.montefinise@nypost.com

Related article: http://www.upi.com/NewsTrack/Top_News/2008/01/06/nyc_not_getting_safer_for_birds/3879/
NYC not getting safer for birds

Bird lovers say the bird-nappers drive through the city in the early morning, tempting birds with seed and then trapping them in large nets, the New York Post reported Sunday. Then they are sold for $5 or $10. Animal advocates gained the ear of City Councilman Tony Avella, who passed their complaint along to the city, the Post said.

In response, Health Department Commissioner Thomas Frieden said he is starting a coordinated effort with other city and state agencies to combat the practice.Concerned citizens who witness pigeon harvesting can inform authorities by calling the city's 3-1-1 citizen access hotline.
Posted by New York Bird Club at 9:37 AM

Here in California, Los Angeles, there are few poachers who illegally trap pigeons for shooting ranges and hunting dog training. Although pigeons are not protected as in NY, thre is a law that prohibits trapping. lots of my rescued pet pigeons were trapped by these illegal poachers.
It's been devastating and so traumatic for me and other pigeon lovers.
I have all the information about these cruel, sadistic, hateful poachers and need help to prosecute them for illegal trapping and animal cruelty. PLEASE HELP SAVE OUR LOVE DOVES.
1-310-388-7253