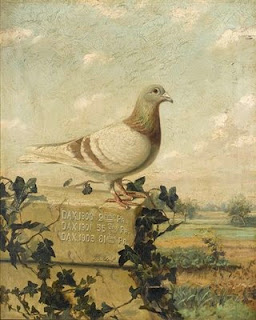 They were a secret airborne force who worked undercover during World War II. Those who were discovered were shot — or eaten by falcons.
A London auction this month has revived memories of the war's animal heroes, including pigeons who flew dangerous missions to bring messages from behind enemy lines.
Several pigeon portraits from the collection of a wartime bird-breeder are included in the "Gentleman's Library" sale, an eclectic array of items being offered at Bonhams auction house Jan. 15.
The paintings are owned by Jack Lovell, a pigeon breeder who was approached by British intelligence services in 1939 to provide birds for covert operations. The avian unit, overseen by military intelligence, was housed in secret pigeon lofts in the coastal city of Dover.
Pigeons' homing instinct make them excellent messengers, and more than 200,000 served with British forces during the war. Thousands were placed in containers fitted with parachutes and dropped by British bombers behind enemy lines, where they were picked up by Resistance fighters or sympathetic locals and used to send messages back to England.
Others worked as double agents, fitted with tags identical to those worn by Nazi-owned pigeons in the hope they would be given coded messages which they could bring to British code-breaking headquarters at Bletchley Park, near London.
"When it came to the D-Day landings a lot of soldiers were sent off with a pigeon which they kept under their coats, because there was complete radio silence," Bonhams spokeswoman Charlotte Wood said Friday. Those who survived brought back intelligence about German gun positions on the Normandy beaches.
It was dangerous work. The Germans deployed falcons to pick off the British birds. Domestic predators were also a threat.
Thirty-two pigeons were awarded the Dickin medal, Britain's highest award for animal valor. They include an American bird named GI Joe, credited with flying 20 miles in 20 minutes with a message that stopped U.S. planes bombing an Italian town occupied by British troops.
The portraits at Bonhams, painted in the late 19th and early 20th centuries, depict champion racing pigeons owned by Jule Janssen, a Belgian breeder whose birds were the ancestors of Lovell's wartime flock. They are estimated to sell for between $600 and $1,400 each.
The sale also includes a silver candlestick inscribed to Jet, a German shepherd awarded the Dickin medal for finding survivors in the rubble of bombed London buildings.
Bonhams said the auction features "a wide range of typical accessories for a gentleman's library," including furniture, bronzes, busts, lamps, walking canes and humidors.
Other items set to go under the hammer: a tiger skin rug with mounted head; a Boy Scout hat once owned by the movement's founder, Robert Baden-Powell; a pair of glass cucumber straighteners and a lock of hair belonging to Catherine Parr, sixth wife of Henry VIII.
Bonhams director Robert Bleasdale said the items were intended to reflect a sense of "comfort, nostalgia, the unusual, fun."
"It's more of a gentleman's indulgence, really," he said.