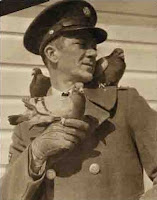 "The Pigeoneers" is an homage to the bravery of homing pigeons who saved thousands of lives in combat in the Great World Wars. Their achievements embodied the attributes of service, endurance, loyalty and supreme courage. Here, their memory is evoked by Colonel Clifford A. Poutre, Chief Pigeoneer, U. S. Army Signal Corps Pigeon Service, 1936-1943. Poutre enlisted as a Private in 1929, soon after, became a Pigeoneer stationed at the 11th Signal Company, Schofield Barracks, Hawaii until 1936In this debut film, director Alessandro Croseri delivers a stunningly beautiful ode to combat pigeons and their pigeoneers. The documentary follows Col. Clifford Poutre at age 103 during the final year of his life and examines his innovations in the training of homing pigeons for combat missions during World War II.

Drawing on a rich array of archival footage, the film tells the story of Poutre's thirty-one years of military service as former Chief Pigeoneer of the U.S. Army Signal Corps, his successful rejection of "starvation" methods of training in favor of a system defined by kindness and care, his pigeons' remarkable feats both in combat and in civilian races, and his notable friendships with the likes of Nikola Tesla, himself an impassioned pigeon handler in the later years of his life.

Through a collection of intimate interviews and black and white photography set to the nostalgic tunes of Glenn Miller, The Pigeoneers serves up a one-of-a-kind tribute and heartfelt exploration of the complex, interdependent relationships between humans and the birds we so often overlook.