PETA Offers $2,000 Reward for Information on Blow-gun Shootings of Pigeons in Seattle 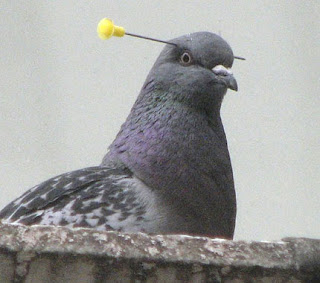 This pigeon was photographed in downtown Seattle. The bird is still alive because the dart did not hit any of its vital organs.

PETA offers $2,000 reward for information on blow-gun shootings of pigeons in downtown Seattle
By Sonia Krishnan

People for the Ethical Treatment of Animals announced today it is offering a $2,000 reward for information on one or more shooters involved in impaling pigeons in downtown Seattle with metal darts.

Several Seattle residents have called PETA in the past two weeks to report seeing three injured pigeons fluttering around with needle-like projectiles — about three to four inches long — piercing their heads, said Tori Perry, cruelty case worker for the Norfolk, Virginia-based organization. The birds were spotted on the 1400 block of Third Avenue and at the corner of Third Avenue and Union Street, she added.

The darts were fired from a blow gun, lodging directly behind the birds' eyes without penetrating their brains, Perry said.

The longer the darts remain, the higher the chance for the injury to get worse and infection to set in, she said. The end result: "a very, very painful death," Perry said.

"This is just a horrifying case," she said. "Someone who would do this to an animal is a short step away from doing this to a human being."

Authorities at the Seattle Animal Shelter said they have also gotten several complaints about the darted pigeons. And, they add, it's been difficult to track and capture the birds to get them proper treatment.

"They are quite athletic, good fliers," said Don Baxter, enforcement supervisor. "They're not hanging around waiting for an officer to get close" and take it to a veterinarian, he said.

Anyone with information is asked to contact the Seattle Animal Shelter at 206-386-7387.

Related Article
Posted by New York Bird Club at 10:19 AM

The above is the kind of cruel and moronic mentality we are dealing with.

We'll, it might be cruel and moronic, but you have to admit it was a great shot.