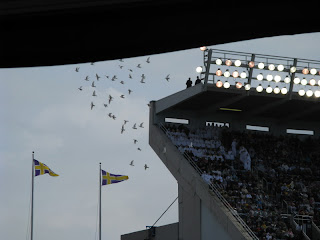 NEW YORK – Tens of thousands of Americans erupted in cheers Sunday, waving white and yellow handkerchiefs as they welcomed Pope Benedict XVI to Yankee Stadium for the final event of his US visit -- a huge outdoor mass.

"Most Holy Father, welcome to New York," New York's archbishop, Cardinal Edward Egan, said from the purple, white and yellow platform dominated by the Vatican coat of arms set up on the baseball diamond, drawing a deafening roar from the crowd.

The pope rose from the white papal chair decorated with a golden cross at the top of the platform, and raised both hands to salute the crowd.

White-robed Roman Catholic clerics sat alongside a rainbow of baseball caps; Asians and Hispanics prayed next to African-Americans and white descendants of European immigrants in the stadium, which had been converted from a shrine to baseball to an open-air church for the mass celebrated by Benedict.

"In this land of freedom and opportunity, the Church has united a widely diverse flock in the profession of the faith," Benedict said in his homily, as sunshine cut through the layer of cloud that had blanketed New York since the morning.

The prayer of the faithful after the homily underscored the ethnic diversity so lauded by the pontiff as it was intoned in English, Italian, Polish, French, Croatian, Tagalog, the language of the overwhelmingly Catholic Philippines, and Igbo, a Nigerian dialect.

Benedict praised the United States as a land of religious liberty, and urged US Catholics to overcome differences and build on the foundation of the church left by their forebears, many of them "immigrants whose traditions have so enriched the Church in America."

"Today's celebration is ... a summons to move forward with firm resolve to use wisely the blessings of freedom, in order to build a future of hope for coming generations."

The rapt audience of more than 57,000 interrupted the homily to applaud as the pope urged them to defend all life, "including the most defenseless of all human beings, the unborn child in the mother's womb."

The 81-year-old pontiff made no mention in his homily of the sex scandal that has rocked the US church, a subject he repeatedly raised during his US visit, urging priests and their flocks to help heal the wounds.

But outside the stadium, a handful of protesters were not letting the issue to be swept under the carpet.

They held up signs denouncing the church and the scandal of predator priests: "Roman Catholicism is the devil" read one sign, while another screamed out "Priests rape boys."

Secret Service agents, who had thrown a thick cloak of security over the stadium, were met by little more than calls of "Viva il papa" as they scrutinized the stadium bleachers during the homily.

New York City policemen on security detail folded their hands and bowed their heads as the pope gave his blessing.

After deacons and priests had served communion, Italian tenor Marcello Giordani sang a stirring "Panis Angelicus," struggling to turn the pages to hold the libretto as the wind picked up.

Earlier, nuns had clapped to the music as singer-guitarist Jose Feliciano belted out "Lean on Me" from the white, purple and yellow platform as part of the spiritual warmup for the mass.

A Mexican wave -- when row after row stand up and raise their arms in the air -- unfurled through the upper seating level, with Roman Catholic clerics joining in as readily as lay people.

*A flock of doves was released and soared skyward shortly before the pope arrived at the stadium in his popemobile, its windows open to allow him to wave at the crowd.

Benedict is the third pope to celebrate Mass at Yankee Stadium, after Paul VI in 1965 and John Paul II in 1979.

As the mass ended, a radiant Benedict waved at the crowd as Ludwig van Beethoven's "Ode to Joy" echoed around the stadium and yellow and white handkerchiefs waved anew.

The mass was the last event on Benedict's six-day visit to the United States, which took him to Washington before New York.

*"I own a "white dove release" business. I have 15 "doves", white pigeons, all have names and birthdays, all love me and fly to me at will. True doves do not have the homing instinct."

I heard that 100 doves were released. Did they all return to the owner?